My garden secateurs are blunt!

Have you ever picked up those old garden secateurs to find that they just squish the branches or they have rusted solid because you left them outside all season?

We’ll we’re here to the rescue! In this blog, we will show you how to make those secateurs usable again. Sharpening secateurs is easy so let’s get to it. Read through and you will find our step by step guide to sharpening your secateurs.

What kind of secateurs do you have?

There are two main types.

The anvil secateurs are a design that is best suited to hardwood cuttings. The Bypass secateurs is what I want to show you how to sharpen as these are the most complex.

Once you understand the theory behind the cutting process you will know exactly what to do.

How do Anvil secateurs work?

Like the name suggests the anvil secateurs have an anvil. Not the sort you would find in a foundry but a soft metal or plastic anvil that the blade mates. A cantilever mechanism maintains the cutting blade parallel to the anvil. For these to work well it is imperative that the anvil is in good condition and the blade is razor-sharp.

How do bypass secateurs work?

Unlike the anvil secateurs, the bypass model works on a similar basis to scissors. The slicing action of the blade against the bottom blade cuts soft vegetation with ease. The action is emphasised by the mating top blade which accurately swipes across the side on the heavier bottom blade. Just like the anvil type the bypass is reliant on the cutting surfaces being very sharp but also accurately machined.

Big mistakes when sharpening your secateurs

You are doing some pruning and those Felcos bypass secateurs are badly bruising those rose stems. So what do you do? You bring out that pocket diamond sharpener and attempt to put an edge back on that tool, a big NO.

Here you will learn how I sharpen my bypass pruners. The model in the picture are made by ‘Wolf’ but these are very similar in design to the repected and iconic ‘Felco’

Remember me saying about the precision grind? The problem is when these tools start to crush softwood instead of cutting it is a telling tell sign that the mating surfaces are worn. The best thing to do is polish off the back of the blades which we will explain.

Re instigating the cut of the bypass secateurs.

Well, I am finally going to explain how I sharpen my bypass secateurs. Take a look at that tool and you will see it is made up of a few components.

There are many so-called all in one sharpening solutions but frankly, you should stay clear from anything that promises the unrealistic. All you need is a flat stone and a sharpening file.

I personally use diamond sharpeners

Are my secateurs in need of honing?

Sharpening the bottom and top blade.

First of all, you need to remove the bottom blade. Looking at the blade you will see two machined faces. One flat and one perpendicular which has a curve.  Don’t overly worry about the curved face as the will be sorted with the first process. 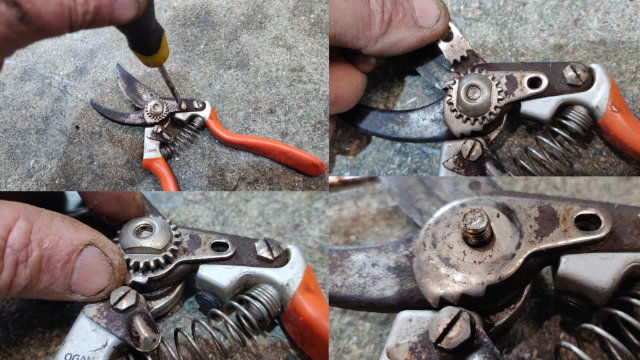 Before you can sharpen your secateurs you will need  to dismantle them. 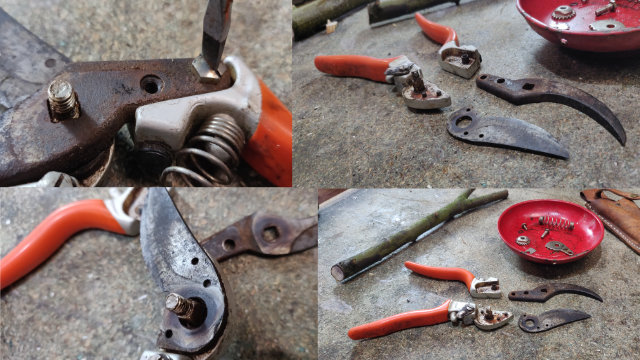 So you have exposed the spindle bolt. 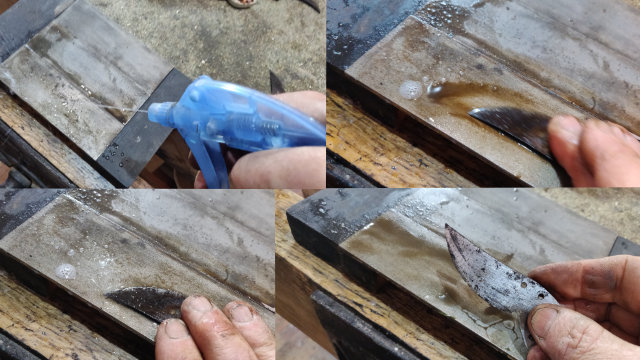 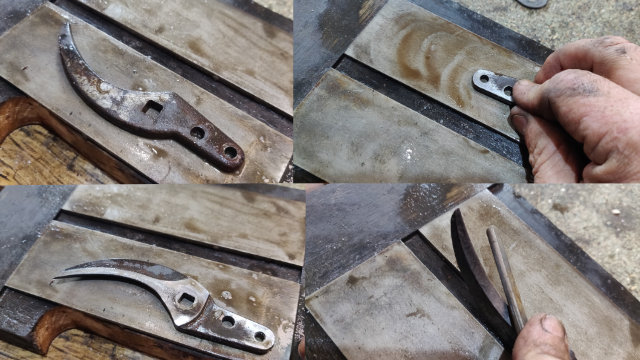 Repeat the process on the the bottom blade. With the exception of a little work on the grind angle. Use a round diamond file for that angle. You are only knocking back the burr that was created from the previous process.

After you have completed the sharpening of the bottom and top blades  you can go to the assembly stage. 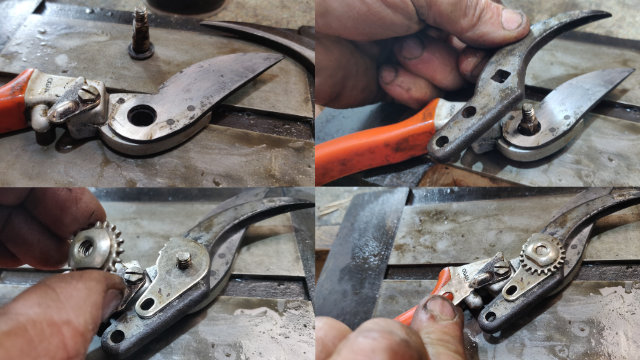 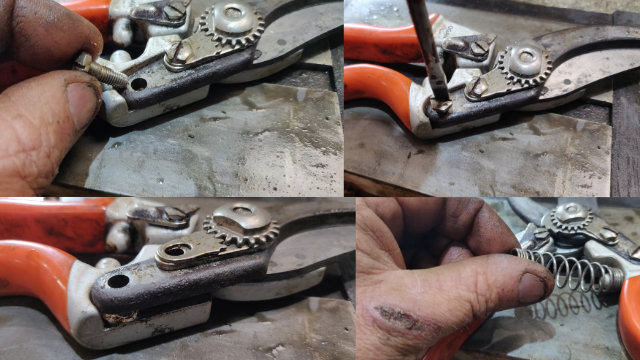 You are well on the way to finishing up 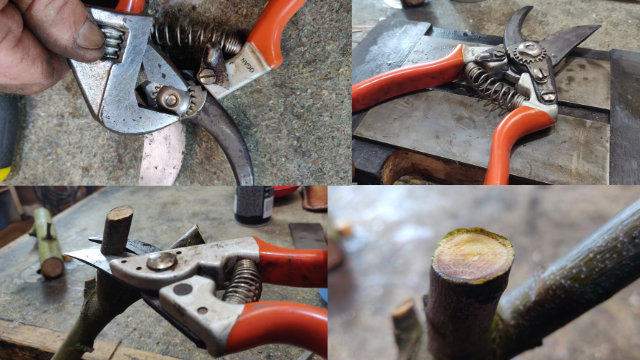 When you have all the parts back together so they now resemble your secateurs you might need to adjust them.

The sound they produce should resemble the sound you hear when you use scissors. No grinding or notches.

The above process will machine the flats so they marry up perfectly. Once they are mating the cutting edges will naturally meet right on the edge and should feel positive. As long as they meet perfectly the ability to cut should be as good as you could should expect.

History of the secateurs

The first secateurs were the Anvil pattern. These were invented by a French aristocrat who happened to be a politician. During the French revolution in 1789, Marquis Bertrand de Moleville fled France for Britain to escape being executed by the mob with their guillotine.

After his near-death experience with the blade, it was apt that de Moleville invented the secateurs in 1815

Because this new tool was easy to use and required only a little force they were ideal for lady gardeners to use. The tool was a revelation and changed the way pruning was undertaken. Before the secateurs was even an idea pruning tasks were carried out with a sharp pruning knife or scissors.

Garden writer William Robinson saw how these novel single-handed secateurs could change how pruning was done. He extensively wrote about the practical implication of the tool and soon any stigma from the male gardening population was soon erased.

My conclusion of sharpening  secateurs

The above technique is what I use when I sharpen any of my secateurs and it works perfectly well for bypass loppers too.  So why not give it a go and save money while you garden.

Thank you for reading my blog on sharpening those blunt secateurs and if you would be kind and share this with your friends.

Thank you for reading our blog in ‘How to Sharpen’ your secateurs. If you are wondering who I am and why you should follow our advice on sharpening? I have been working in woodworking for over thirty years and a keen gardener. I have sharpened everything from plane irons to TCT saw blades by hand and machine. This experience is easy to translate into any format of sharpening as the principles are the same.

Written and edited by Marcus Kett – creative working for over 30 years.